Does it taste delicious? 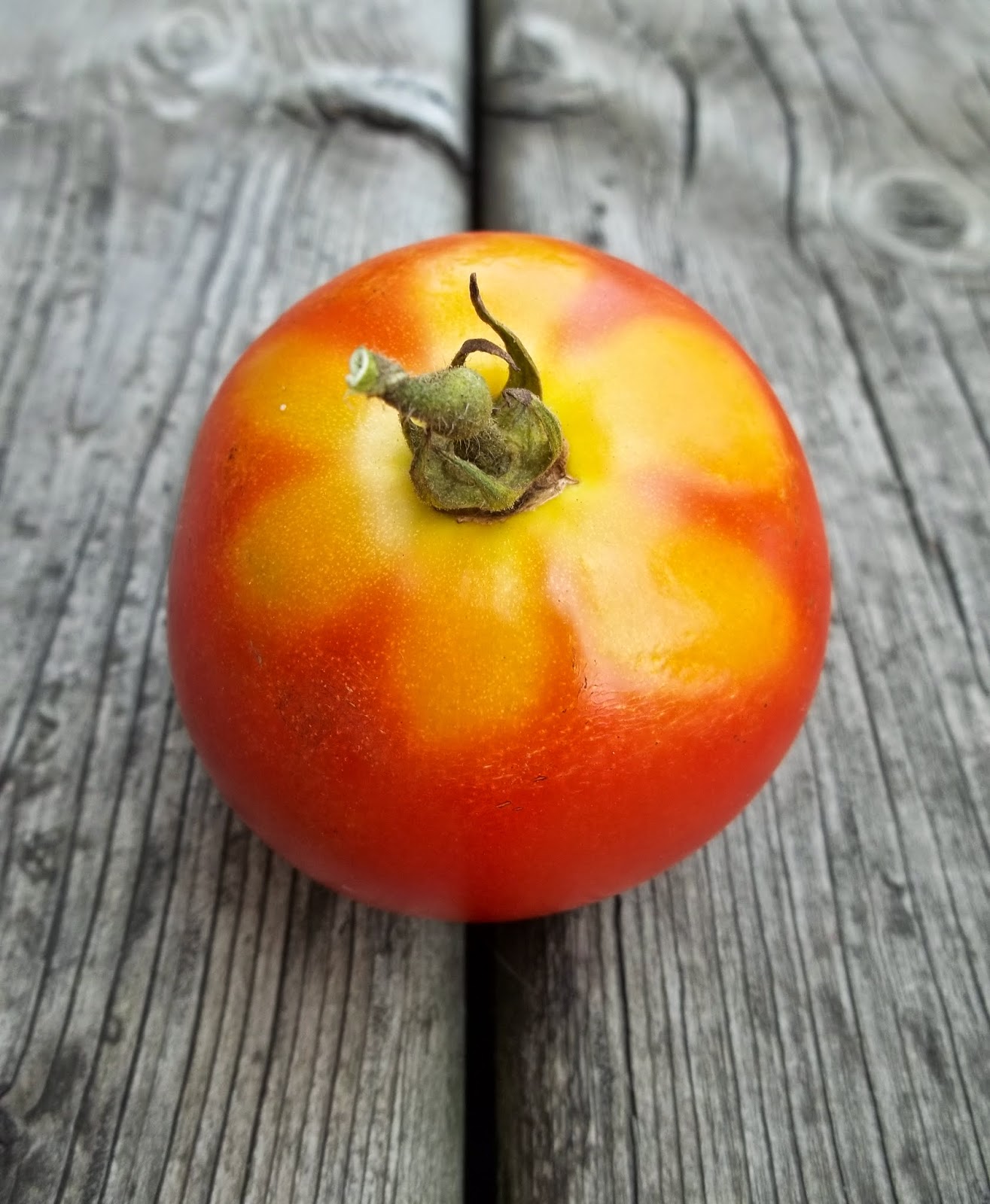 This is Tomtom, the first tomato harvested this summer.  For some reason as he grew a lovely yellow flower showed up.  I took a picture before he became part of a toasted tomato and cheese sandwich.  Quite delicious !

I kept this picture in my studio (once was my living room) for a few months.  It reminded me that beauty is everywhere, even in something as ordinary as a tomato.

One day, I think it was the day after Thanksgiving, I was cleaning my studio and found two red offcuts from my church door quilt.  Not being one who wastes fabric, I could see where this might lead.  I sewed the two pieces together.  Then I made it round... sewed strips of grey for the background, found a yellow and a green that agreed and as I played, this came about.

I put it on the longarm and with some lavender (in the grey) and red (in the red) and black (for details including the year in the right hand corner), it was complete.

I absolutely love it.  My tribute to Tomtom, the First Summer Tomato.  It reminded me of a blog post I read recently (Sarah Selecky - I recommend her to anyone who loves to write) in which she recommends AFNR, Art For No Reason... I have modified this to AFAR - Art For Any Reason :) 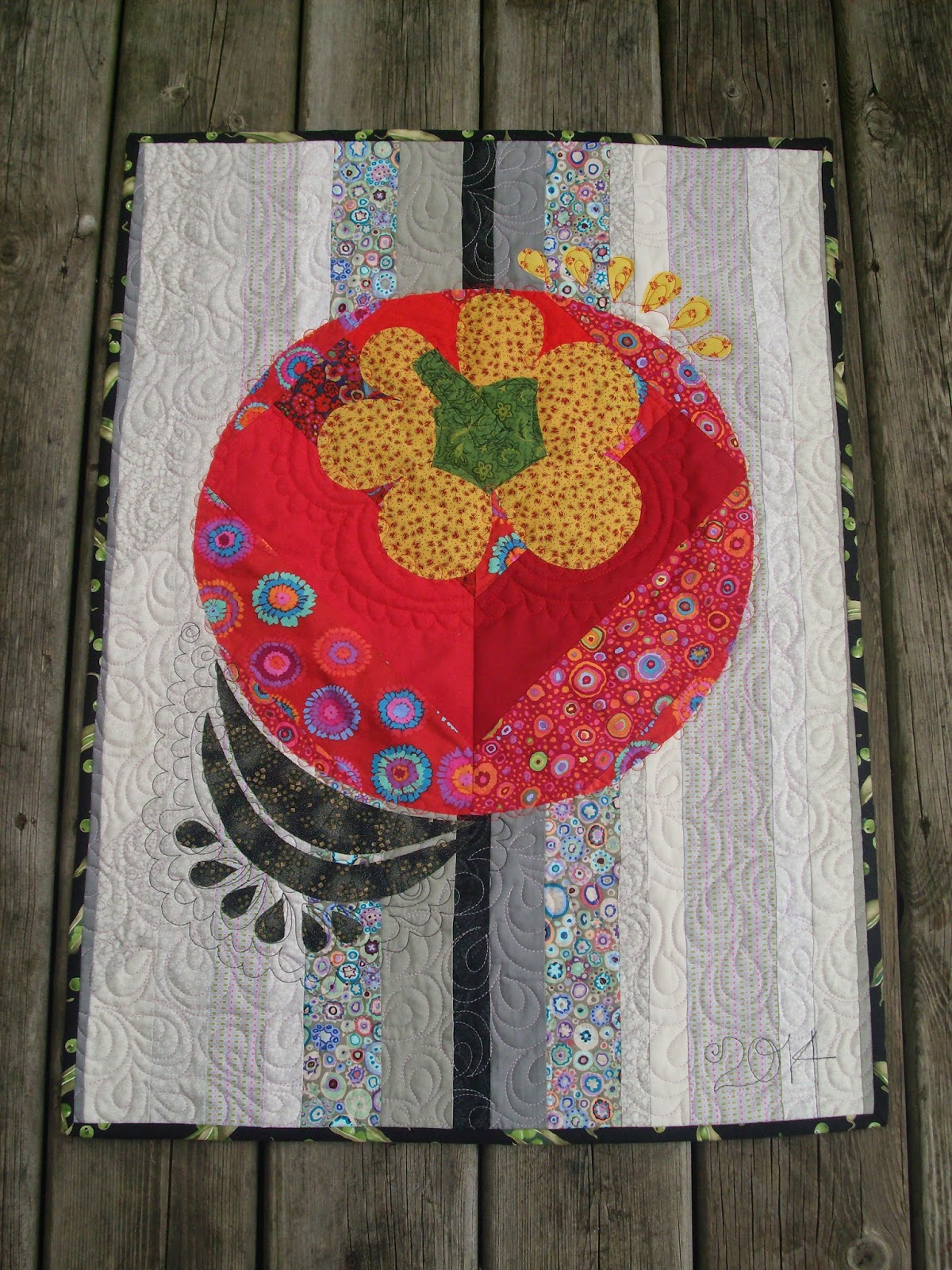 Quick post... I wanted to show my Aunt's Angry Rooster wallhanging.  I just finished quilting it to give to her tomorrow at Thanksgiving supper, to which she brings her fabulous sweet potato puree.

My Aunt Jackie is in her 70s and still loves to do handwork like applique. However she never signs her work !  Many times I have reminded her to sign everything, but she never does and tends to diminish her talent as many of us do.  We are all Artists, Quilt Artists, Fibre Artists, Sewists... whatever you want to call yourself... but all Artists (with a capital A).  I added my Aunt's initials JBDS and the year to the quilting as you can see in one of the close up pictures.

The binding is ready for hand finishing... which I know my Aunt enjoys doing, otherwise I would have machine finished him for her.

Meet Rad Rooster... in all his angry glory.  Not a turkey but a rooster with attitude.

I wish everyone a Happy Thanksgiving... I am grateful that I have eyes and hands that allow me to do the work I love.

Blessings to you all,
Tania 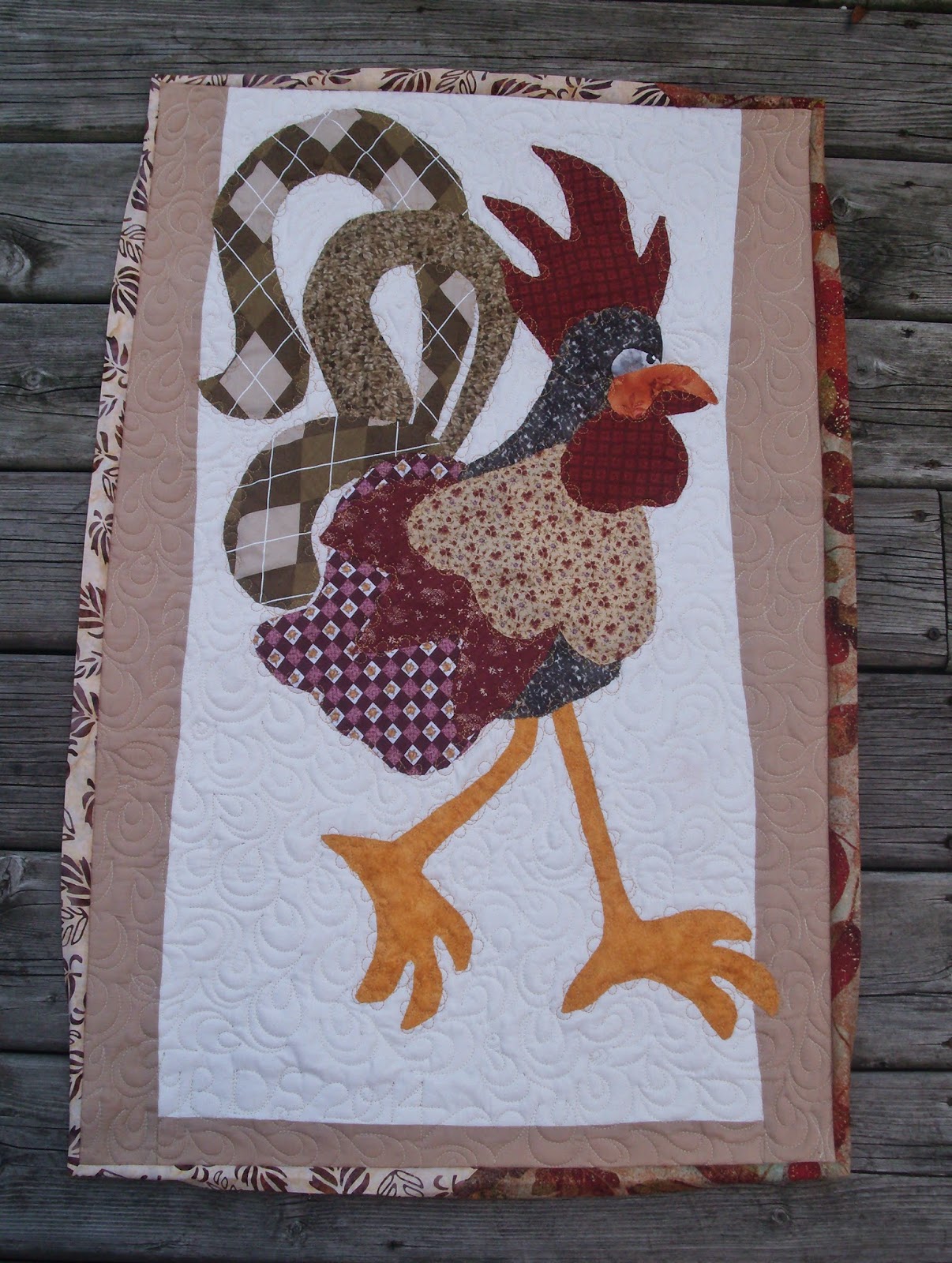 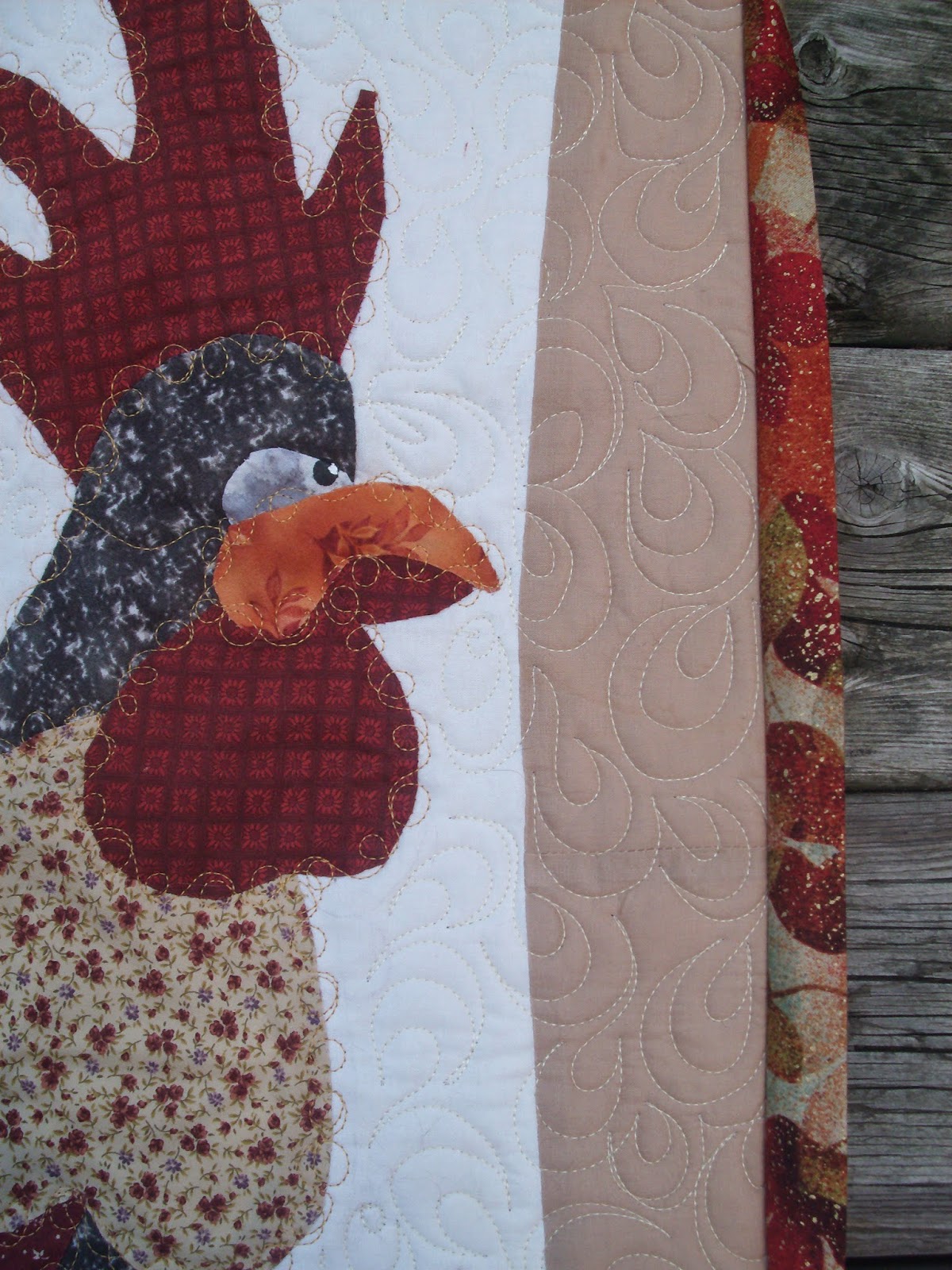 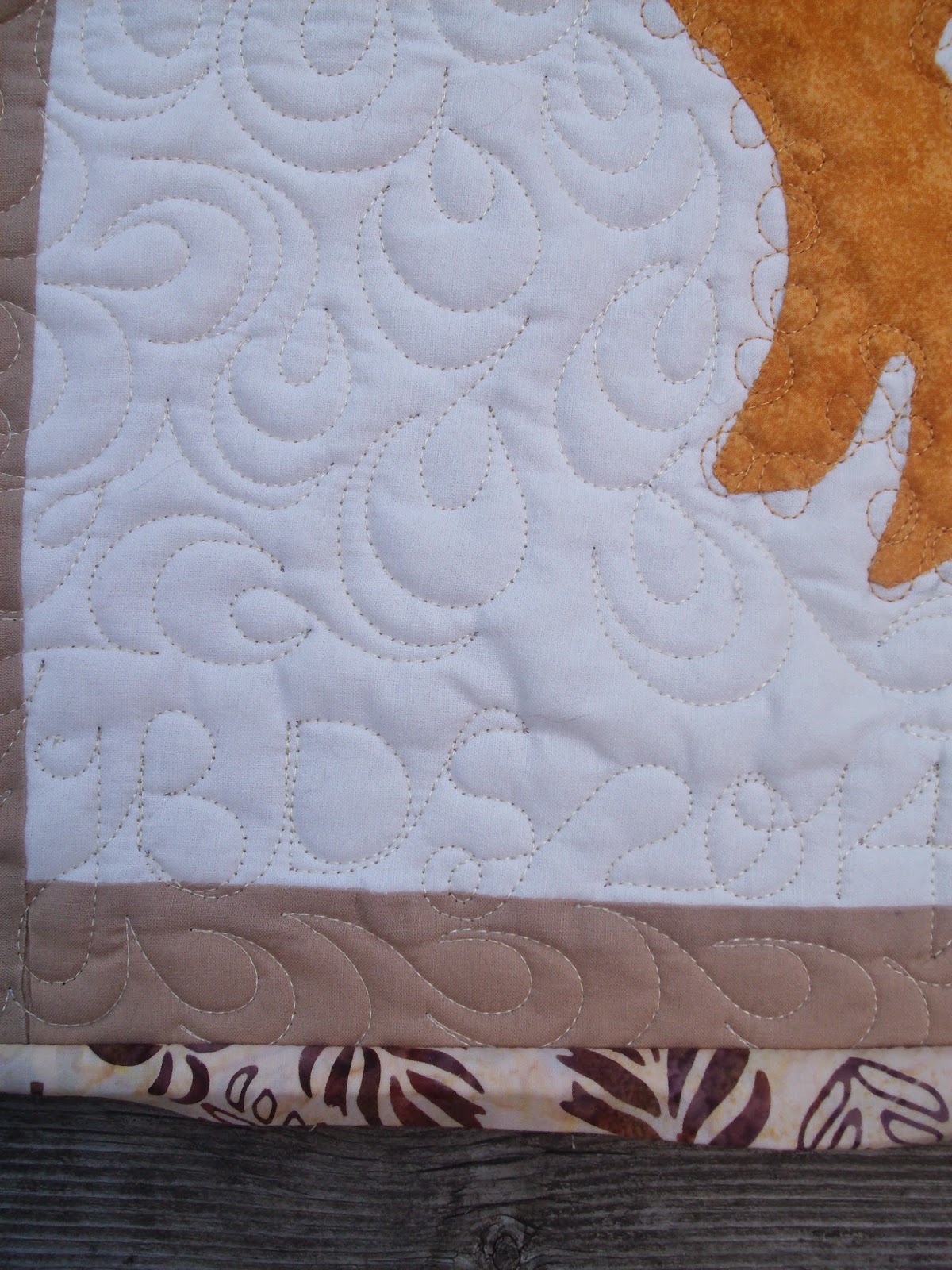 I, for one, was totally surprised...

I have been living in Ancaster about 17 years now... and we have a fall fair each year. Unlike every other of the last 16 years, this year I decided to actually enter a quilt.  It is one of those things that I say and say and say I'll do but so seldom actually do, at least that has been the way up until now.  No more I decided, words are fine, but action is required !  To enforce my new proclamation I entered two quilts.  I know, I know, I can't be stopped once I get going.

The quilts I entered were perhaps, perchance, shall we say... less than traditional.  My logic here was that if they did not win that was down to the fact that they were not regular quilts.  This of course assumed that the judges would follow a traditional path (not of course that there is ANYTHING wrong with traditional).  I may have mentioned previously that I tend to make misjudgments, this is another such case.

I dropped off the quilts and tried not to think any more about it.  You may imagine my delighted surprise (really I think I may have squealed, ok... shrieked) when my daughter let me know that both my quilts had won a prize. I had a first and a second in the categories I entered.  She had photos to show me in case I did not believe her.  How well does my child know her Mum !

Here are the quilts with their pretty ribbons.  Both have been posted on my blog before but of course they deserve a second shot at fame.

Honestly I was really surprised I won. I was thrilled and touched, but most of all I was humbled... that I think so little of my abilities and so little of those who were the ones to judge them. 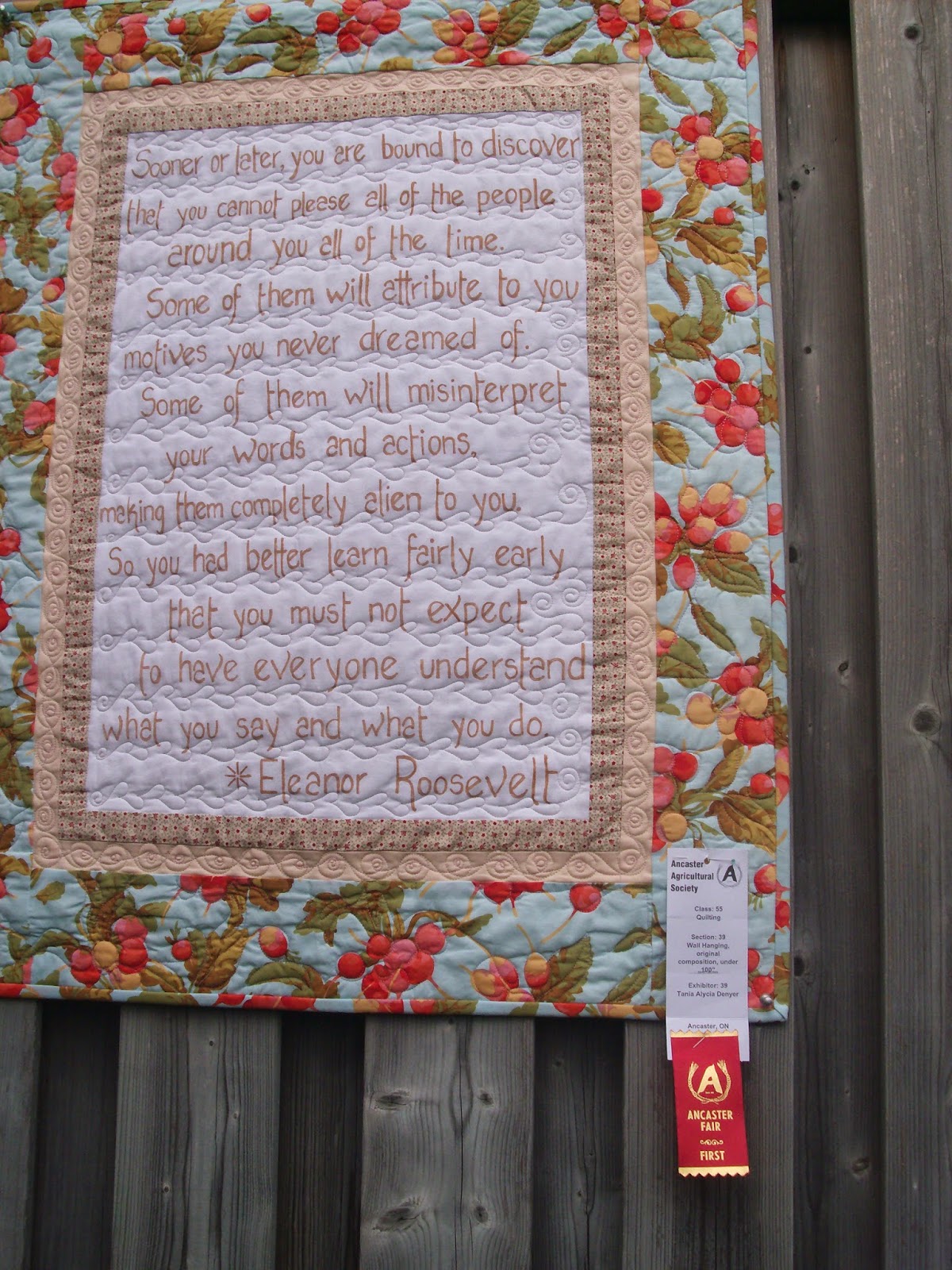 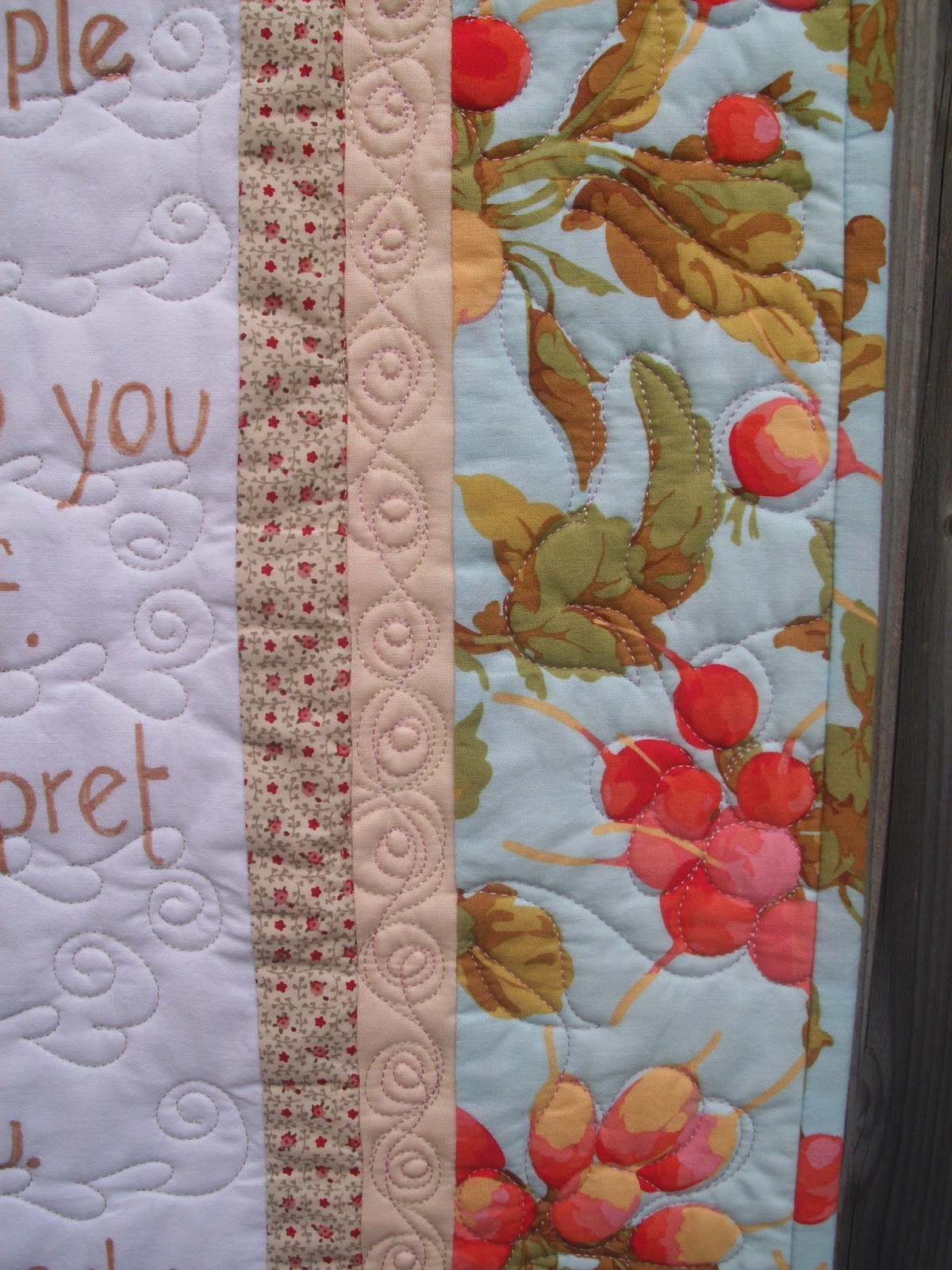 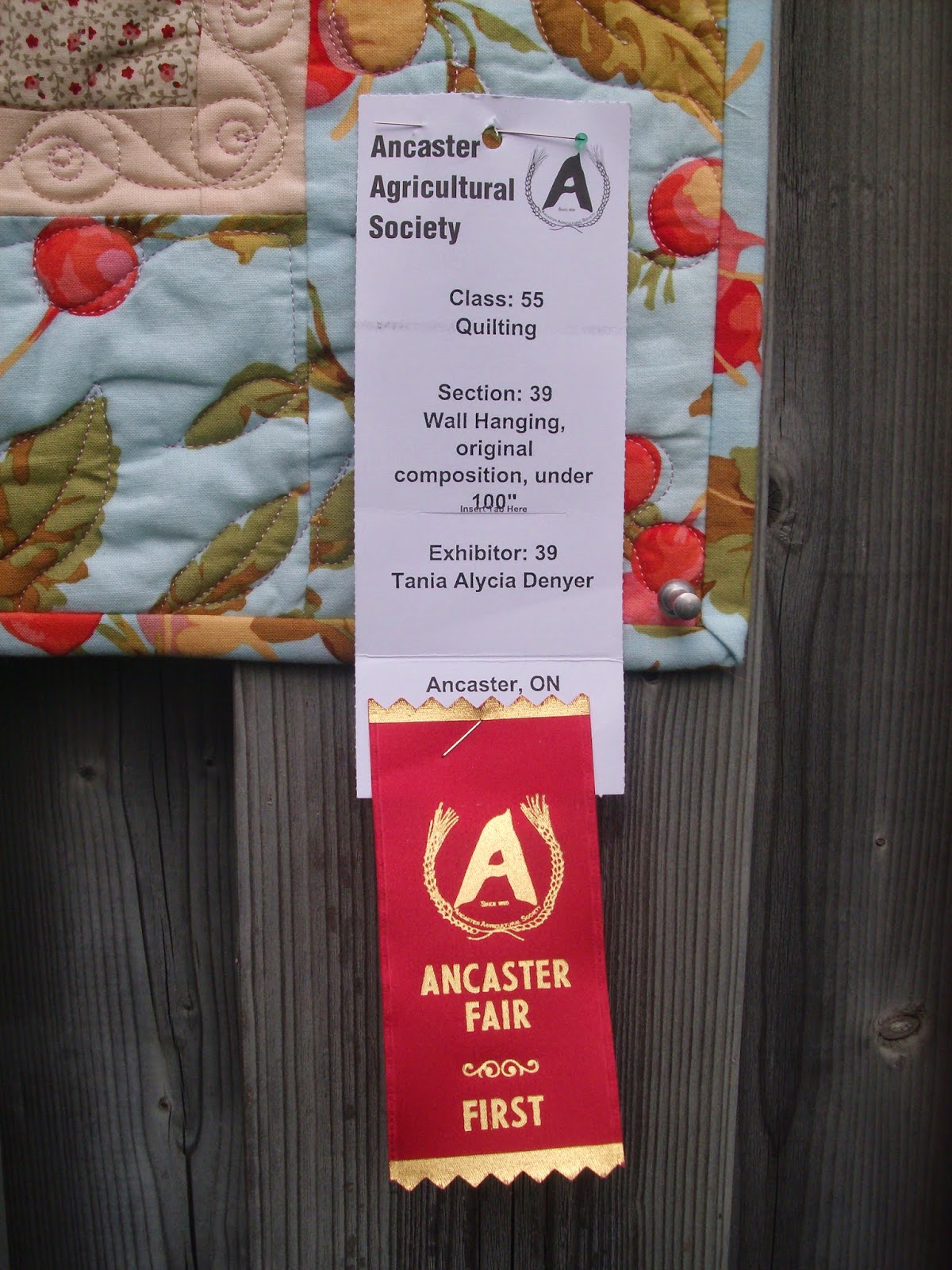 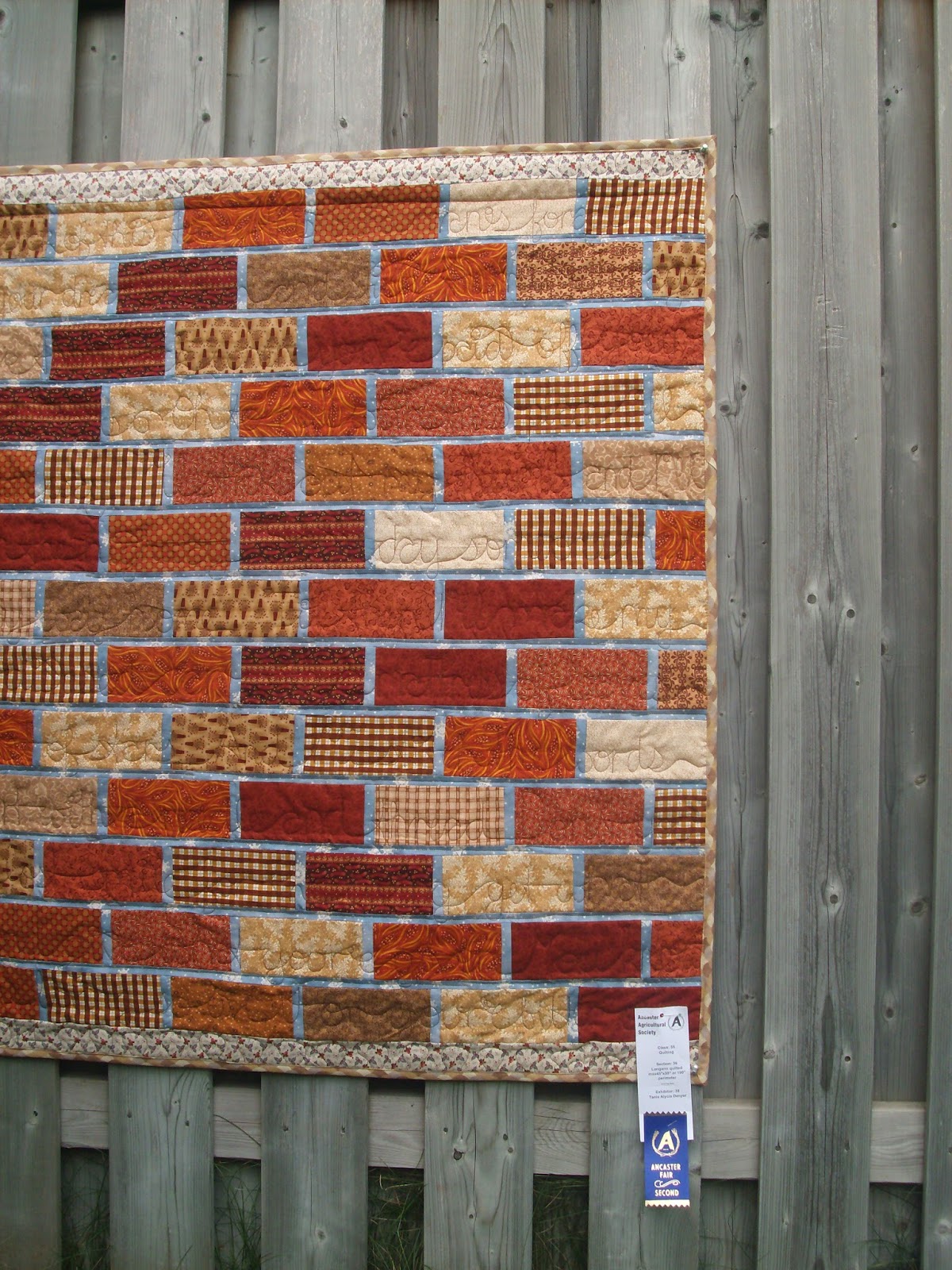 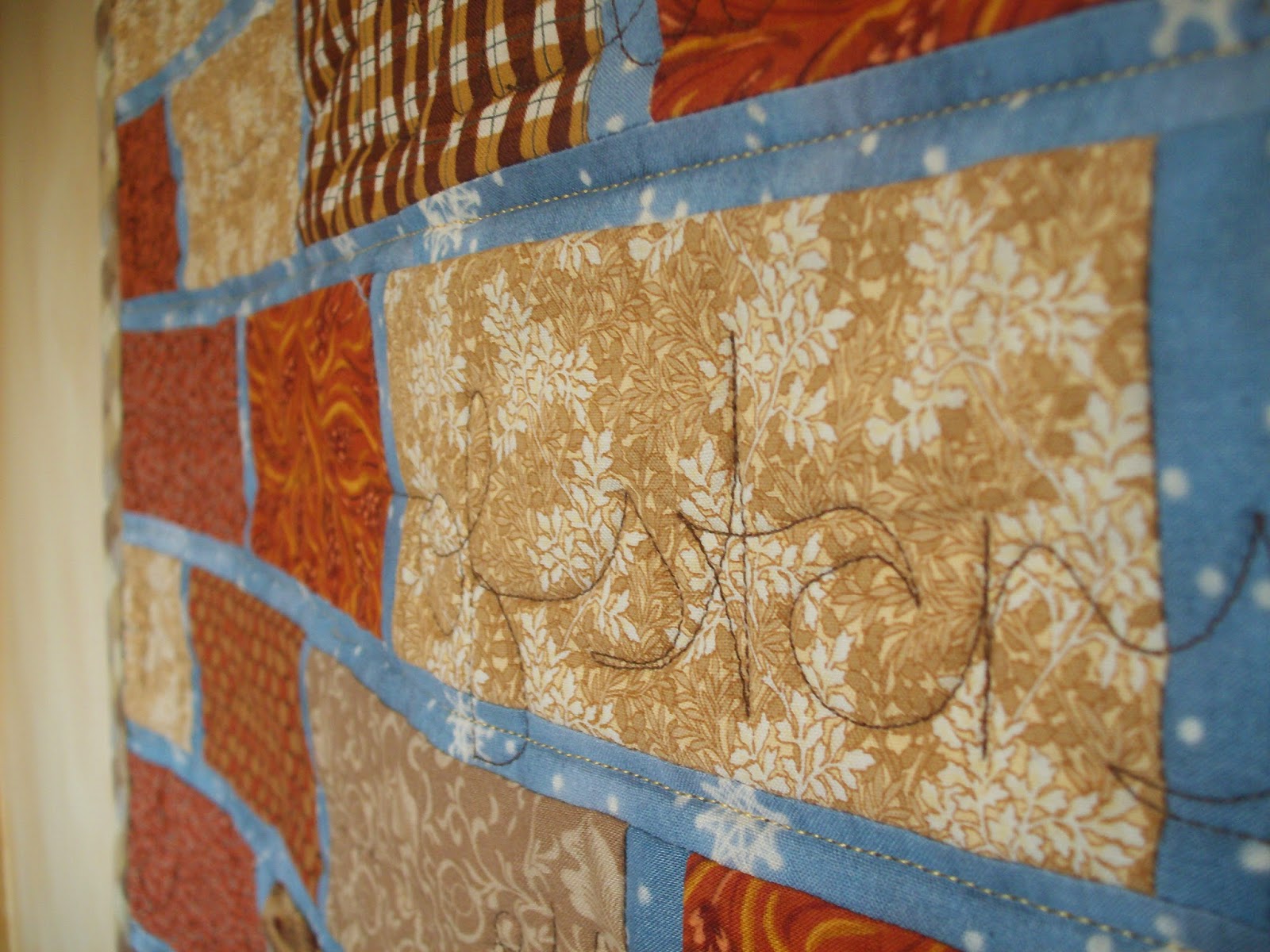 p.s. Stay tuned for my next blog post, it is what I have been working on like a mad hermit for the last two weeks or so...